Rachael Watters has made it her mission in life to help local veterans. As the new commander of Medford VFW Post 1833, she is the fourth woman in Oregon to take on a VFW commander position. 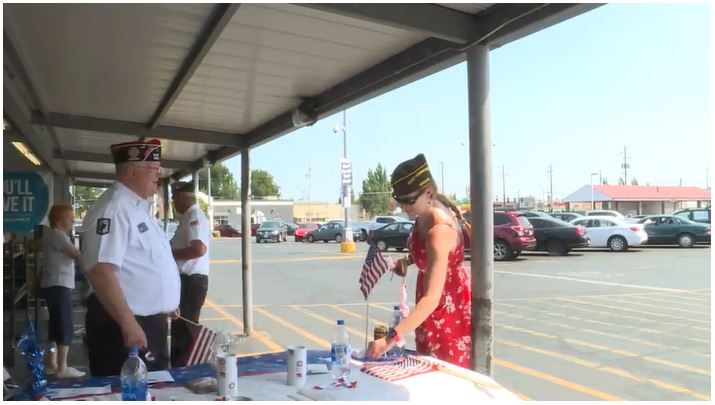 A veteran herself, she knows how much those who join the military give up to serve their country, especially those who have fought in wars.

Watters served with the 101st division and joined the Army when she was 17 years old. She served two tours in Iraq and met her husband while overseas.

While serving overseas, Watters husband was exposed to depleted uranium and later died from cancer. "That’s another aspect of why it’s so important for me to take care of veterans,” said Watters.

Since returning to Southern Oregon, the VFW has become like a family to her, she said.

"These Vietnam guys here are some of my best friends,” she said.

On Friday, the VFW Post 1833 set up a table outside of Sherm’s Thunderbird Market in west Medford to distribute Buddy Poppies and American Flags in honor of the Fourth of July weekend.

Community members donated money to help support the VFW and its mission to help local veterans in need, such as by providing basic necessities like toiletries or a tank of gas.

Looking toward the future, Watters’ goal is to help veterans in need and to make a lasting impact. "One of my mottoes is, ‘You always leave something better,” so for me once I leave this earth I know I will have some sort of impact within the area and the veterans of the area,” she said.

Watters said she would like to see more women and younger people in the VFW.

"People don’t know that the VFW isn’t just the older generation. It’s not just Vietnam vets, it’s not just men, it’s also women. We are trying to bring in more women and more of the younger generation so we can keep doing what we do here,” she said.

Rachael Watters has made it her mission in life to help local veterans. As the new commander of Medford VFW Post 1833, she is the fourth woman in Oregon to take on a VFW commander position.

News & Info from your department

taking weekly class to help enter data into the webpages

WASHINGTON - The Veterans of Foreign Wars (VFW) is proud to celebrate our nation's African American service members, veterans and ...